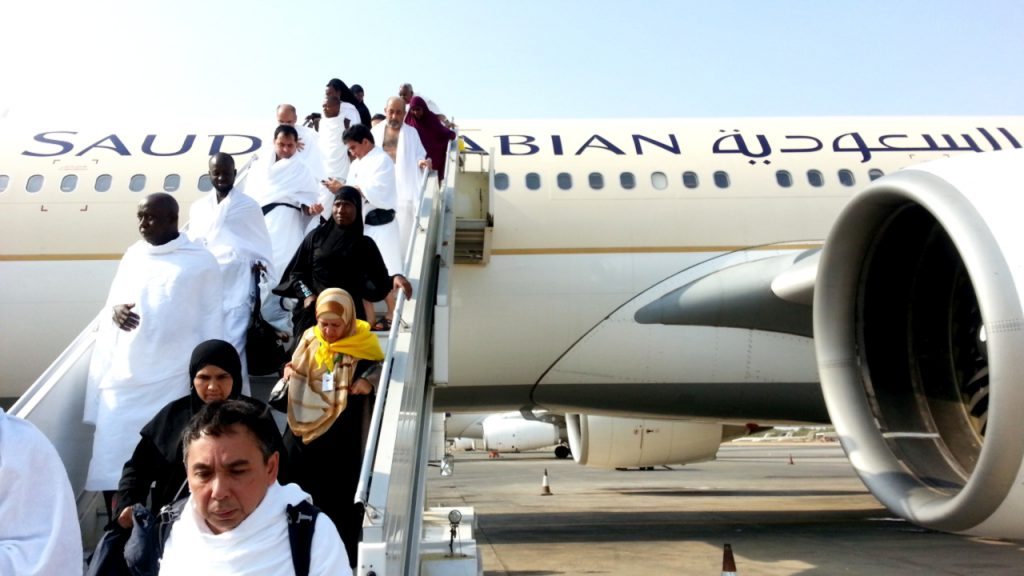 During your journey to the sacred cities of Makkah and Madinah, you should remain engaged in the remembrance of Allah and his Messenger ﷺ.

Before embarking on your journey, or any journey for that matter, spend time with your family. Seek the blessings of your parents or make dua for them if they have passed away. Visit your extended family, neighbours, teachers, mentors and friends to ask for their forgiveness and to bid them farewell. Embrace them before departure and request their dua. Umar ibn al-Khattab I said:

I asked the Prophet ﷺ for permission to perform Umrah. He granted me permission and said: ‘Do not forget us, my brother in your dua.’ He said something which was more pleasing to me than owning the world.’ According to another report he said: ‘Let us share in your dua, my brother.’
[Narrated in Sunan Abu Dawud]

You can recite this dua for family and friends:

Abu Hurairah I narrated that the Prophet ﷺ said:

Well-wishers are encouraged to read the following dua for the traveller:

This dua may also be read for the pilgrim:

Allāhumma-ṭwi lahu-l-buda wa hawwin ‘alayhi-s-safar.
O Allah, shorten the distance for him and make the journey easy for him.3At-Tirmidhi (3441), Ibn Majah (2771), and al-Hakim in al-Mustadrak (2/98), who grades it as sahih; and adh-Dhahabi agrees.

Before leaving the house, perform two rak’ahs of salah to protect you from harm during your journey.

Abu Hurairah I reports that the Prophet ﷺ said:

No-one has left his family with anything better than two rak’ahs that he performs among them when he intends to travel.”4Al-Futuhat (5/105-107). Ibn Hajar mentioned that this hadith was reported in at-Tabarani’s work al-Manasik. There is some weakness in its chain but it is raised to the level of hasan by other supporting narrations.

After saying salam, the Verse of the Throne (Ayatul Kursi) should be recited. It has been reported that whoever recites this before leaving the home will not be afflicted with anything that he dislikes until he returns.5Al-Futuhat (5/108). Ibn Hajar said he could not find a source for this hadith with this specific wording. However, the meaning of it is mentioned in a gharib hadith whose chain contains some weakness, which was reported by Ibn as-Sunni, al-Bayhaqi in ash-Shu’ab and Abu ash-Shaykh in Thawab al-‘amal.

I was fearful, so I went to al-Qazwini and asked him for a dua. He told me: ‘Whoever wants to travel and fears an enemy or loneliness should recite Li-īlāfi Quraysh, for it is security from all evil.’ I recited it and no incident has befallen me until now.

After the prayer, make dua for an easy journey and ask for assistance during your travels. You may say the following:

O Allah, to You I turn, and to You I hold fast. O Allah, be my sufficiency for that which preoccupies me and that which does not preoccupy me. O Allah, provide me with fear of You, forgive me my sins, and turn me towards good wherever I may turn.6Ibn as-Sunni (496) and al-Futūhāt (5/11). Ibn Hajar states that this hadith is gharib, and goes on to mention certain weaknesses in its chain.

Upon leaving the house, recite:

In the Name of Allah. I put my Tawakkul (trust; reliance) in Allah. There is no power and no might except with Allah.
[Narrated in Sunan Abu Dawud]

Then read the following:

Make sure you give some charity before you leave.

There are a number of supplications you should try to recite at various junctures during your journey. At the very least you should say “Bismillah” when boarding your conveyance and “Alhamdulillah” when seated.

Dispensations for the Traveller

Due to the often strenuous nature of travelling, you will be entitled to certain dispensations starting from your hometown. Abu Hurairah I reports that the Prophet ﷺ said:

Travelling is a kind of torture as it prevents one from eating, drinking and sleeping properly. So, when one’s needs are fulfilled, one should return quickly to one’s family.
[Narrated in Sahih al-Bukhari]

As a traveller, you are allowed to do the following :

According to the Hanafi school of thought, you are deemed a traveller when you intend to travel 81 kilometres from your place of residence. These dispensations will apply as soon as you leave the boundaries of your hometown.

Shortening the Salah during travelling is a commandment and a mercy from Allah:

And when you (Muslims) travel in the land, there is no sin on you if you shorten your Salah (prayer) if you fear that those who commit Kufr (disbelieve) may attack you; verily, the Kafirin (disbelievers) are ever open enemies unto you.
[Surah an-Nisa, 4:101]

It was a practice of the Prophet ﷺ, as indicated by Umar I who said:

During your journey, Asr, Maghrib and Isha salah should be shortened from four rak’ahs to two rak’ahs. This does not apply to Fajr and Maghrib Salah which remain at two and three rak’ahs respectively.

The ruling of qasr does not apply to sunnah prayers, although is not sinful to omit them when travelling.

Note: the two rak’ahs before Fajr and Witr were prayers that the Prophet ﷺ never omitted, even when travelling.

You should continue to perform salah in this shortened manner during your Hajj or Umrah unless you intend to stay in either Makkah or Madinah for more than 15 days. If you plan to spend 13 days in Makkah and 12 days in Madinah for example, you should still shorten the prayers.

When you’re in Makkah or Madinah, it is likely you will be performing salah in congregation behind the Imam. In this case, you must carry out the four rak’ah prayer fully. It is not a valid practice to break off from the congregation after the second rak’ah.

Jama’ refers to the practice of combining two prayers within one prayer time. This is valid in the Shafi’i, Maliki and Hanbali schools of thought. Hanafis don’t generally follow this practice.

There are two acceptable types of jama’:

Either of these may be performed depending on your circumstances.

According to the Hanafi madhhab, the only time when prayers may be combined is during the third day of Hajj in Arafat and Muzdalifah. Prayers may not be combined in any other circumstance.

If you’re travelling to perform Umrah during Ramadan, fasting is optional, although it is better to fast if it does not pose undue hardship. If you choose not to fast, you must make up what you have missed at a later date.

Salah on a Plane

During your journey, you should try your best to observe the mandatory prayers, without inconveniencing others. Following are some tips on how to perform salah on a plane.

If you need to perform wudhu during your flight, do it in the following way:

These are the obligatory actions of wudhu according to the Hanafi madhhab. This will allow you to use less water and carry it out quickly.

Try not to splatter and don’t spill water on the floor to wash your feet. This may present a safety risk to other passengers.

Praying in an Airplane

Every effort should be made to stand and face the Qibla when carrying out obligatory prayers on a flight. Airlines such as Saudia have designated areas where salah can be performed.

Other airlines don’t have prayer facilities which may pose a problem. In these airplanes, standing in certain areas may pose a safety risk or be an inconvenience to others, particularly if it’s a smaller plane.

There is a difference of opinion about what should be done in this scenario. Some scholars are of the opinion that it is acceptable for the prayer to be performed sitting down. Ruku (bowing) and sujud (prostration) should be gestured by bowing the head, with the sujud more pronounced than the ruku.

Other scholars are of the opinion that the prayer must be performed sitting down and then be repeated after landing.

It may then be advisable to take the cautious approach and perform the prayer in the best manner possible during the flight, without inconveniencing others, and repeating it when it can be performed properly.

Nevertheless, you should still ask if there are any vacant spaces on the plane where the prayer can be performed. After all, the prayer itself shouldn’t take a great deal of time.

When to Pray in an Airplane

As for the Salah times, the beginning times of Fajr, Maghrib and Isha can be deduced by looking out of the window. When dawn breaks, Fajr begins and when the sun sets, Maghrib commences. Isha begins after the red glow of the sunset disappears.

Ihram on the Plane

It is perhaps more practical to get changed into your ihram clothing before boarding and then to make your niyyah (intention) to enter into the state of ihram as the designated miqat approaches. The vast majority of toilets on planes are very small so changing into your ihram in such a tight space may be a struggle.

If you decide to change into your ihram clothing during your flight, your plane is likely to have a toilet with changing tables which you can use, although you will still be restricted for space. If you’re flying with an airline such as Saudia, you will have access to a small prayer area where you can put on your ihram. Ensure you get changed well before the miqat as there may well be a rush of people intending to do the same thing as the miqat approaches.

When you’re ready to make your niyyah to enter into ihram, don’t forget to remove your underwear and headgear if you haven’t done so already (if you’re a male) and make sure you’re well acquainted with the restrictions of ihram.

Tip: don’t forget any clothing or footwear on the plane before you disembark.

Other Things to do on the Plane

It goes without saying that you should utilise your time wisely during your flight. Study your notes and guidebooks; the more you commit to memory now, the less you will have to rely on others for guidance later on. If you feel you have studied sufficiently, revise what you have learnt. Since the topic of Hajj and Umrah is so vast, it’s likely that you have missed something. If you come across something that you don’t understand, seek clarification from others around you.

You should also spend time in worship, whether that is reading Quran, partaking in other forms of dhikr or sending salutations upon the Prophet ﷺ.

Checklist for the Journey

Upon arriving in Saudi Arabia, you will have to go through a number of procedures at the airport before being allowed to make your way to Makkah or Madinah.

The are a number of supplications pertaining to travel which you should endeavour to read during the course of your journey.